Montenegro is a sovereign state in Southeastern Europe and it’s also a famous tourist destination. Even though it covers solely around 14.000 km2 and it only has about 670.000 citizens, its contribution to the world cultural heritage is impressive comparing its size.

Montenegro is a country with rich culture. Each town has its own story, so it can be quite challenging to decide where to go and what to see. We know the struggle, so our editors have made a list of TOP 5 must-visit places in Montenegro (listed down below).

Perast is one of the most beautiful little places in Boka Bay, located just a few kilometres from Kotor. It looks like a piece of Venice that has floated down the Adriatic. This tiny town boasts 16 churches and 17 formerly grand palazzos. Perast’s most famous landmarks are actually right in the middle of the waters- two picturesque islands with quite the story behind them – Our Lady of the Rocks (Gospa od Skrpjela) and Island of Saint George.

Our Lady of the Rocks (Gospa od Skrpjela) sits on a man-made island. The story begins on July 22, 1452: two sailors, returning to Perast from a difficult voyage, discovered an icon of the Madonna and Child resting on a rock in a shallow part of the Bay. Considering the find a miracle, they vowed to build a church on the spot. The sailors dropped stones around the spot where the icon was found, slowly creating an islet and building a small chapel. It soon became a tradition for sailors to drop stones in the water around the chapel before a voyage, to contribute to the strength of its foundations and to ask the Virgin Mother to bring them safely home. The tradition of dropping stones at the site remains alive today and forms an integral part of one of Europe’s oldest sailing regattas: the Fasinada. At sunset on July 22, countless local boats are decorated with garlands and sail out into the Bay to drop a stone around the island. 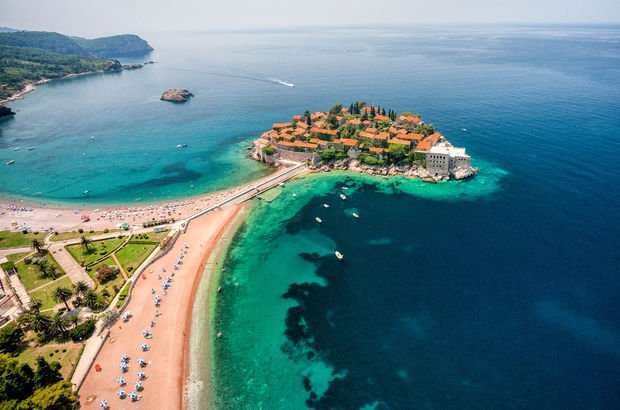 Island of Saint George is other islet off the coast of Perast in Bay of Kotor. Unlike Our Lady of the Rocks, it is a natural island. The island contains Saint George Benedictine monastery from the 12th century and the old graveyard for the old nobility from Perast and further from the whole Bay of Kotor.
Many small restarurants on the Perast coast will offer you great fish specialties. Often called as the quietest town in the Bay, Perast is definitely something special. And as an UNESCO World heritage site, it is a must-visit!

Their doors are open for all the people of good will.

Founded in the 15th century, Cetinje is best known for the many European embassies built when the city served as Montenegro’s capital. During the late 19th and early 20th centuries, the town’s inland valley location at the edge of Ottoman Empire made it a strategic spot for diplomacy. Today, the elegant mansions constructed in the Continental architectural style have been converted into to museums, academies and administrative buildings. Other interesting sights include the 15th century Vlah Church with its fence made from Ottoman rifles and the Cetinje Monastery with its collection of Early Christian Era relics.

Situated high up in the large rock of Ostroska Greda, the Ostrog Monastery is the country’s most unusual architectural site and a major Christian pilgrimage destination. The entire monastery was carved out of a cave in a nearly vertical mountain cliff with only the whitewashed façade left visible. Built in the 17th century as a refuge against the Ottoman Empire, it houses the remains of its founder, Sveti Vasilje, who was sainted after his death in 1671. The monastery includes two inner cave churches ornamented by frescoes, some of which were painted directly on the rock walls.

The main Montenegro attraction is Kotor:

During the visit to Kotor you should, by all means visit the fortress St. John (Sveti Ivan). It is situated above the bulwarks of the Kotor’s Old town. Climbing up to the fortress St. John or as people from Kotor like to call it San Giovanni, starts with the serpentines from the east part of the Old Kotor, which go to the very top of the fortress on 280 m above sea level. Before you set yourself to climb towards the fortress we suggest that you take your camera with yourself, because the pictures of Kotor and bay of Boka Kotorska, which you will see, can not be described in words, but instead they have to be first, experienced, and then noted, pictured. While you are climbing you can enjoy the sights of the Old town of Kotor.

If you are interested in booking a Montenegro apartment for your holiday we suggest to check :